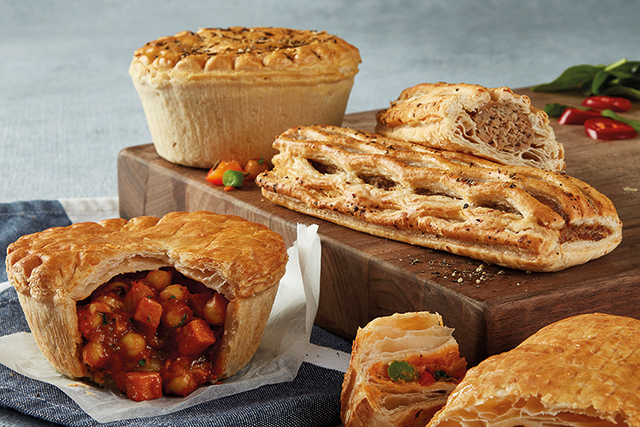 January is the month where consumers are encouraged, through the #Veganuary campaign, to go vegan for the whole month to try it out.

It will not come as a surprise to find that 71% of people said they will eat more healthily as their New Year’s resolution.

Consumers are choosing meat-free for a variety of reasons with health and sustainability being two of the key reasons – more than half of British adults now “adopt vegan buying behaviour”. Looking across food-to-go, eating out and retail the level of innovation and choice for consumers is increasing.

There are a number of different ways of describing meat-free dishes including “vegan” , a recent consumer survey had a clear winner of “plant-based”.  Not only do consumers prefer this claim but they also think it sounds healthier.

The flexitarian movement (a reduction in meat consumption) means plant-based food is already reaching a large proportion of the British population. Half of UK consumers have bought plant-based food in the past year.  Over 60% of recently surveyed shoppers said they had bought more products than the year before.

Not only are new shoppers entering the category, growth has been seen in the number of visits – we are becoming an increasingly engaged nation of shoppers in meat-free.

The impact is seen across various marketplaces:

Delivery – Deliveroo reports orders of plant-based dishes on its platform have risen 330% in the past two years.

Bakery – savoury pastries were consumed once a week by 43% of people – mostly at lunchtime (50%). A greater selection of vegan options would influence 17% of consumers to buy more.

Supermarkets – the meat-free market has continued to enjoy significant growth. Looking at the most recent year-on-year data (July 2019), value sales are up 18% to £474.5million and volumes are up over 13%.  Within the market all sectors are up, the fastest growing in percentage terms is pizza, which has tripled its value.

Food to go – leading operators are expanding plant-based ranges with new products. Boots has added vegan options to its food-to-go offering, including a dessert item. The mixture of healthier and more indulgent plant-based offers displays the widespread appeal of the plant-based way of living as a sustainable lifestyle and not just a short-lived diet.

Education – today’s children are a sophisticated bunch with palates to match. An increasing number of young people are looking for vegetarian and vegan options at school or university.

Since writing our sandwiches insight, Pret has confirmed the four vegan versions of its top sandwiches – the VLT (a vegan take on the age-old BLT); the vegan “chuna” mayo baguette; the vegan eggless mayo and cress baguette and the vegan hoisin mushroom wrap.

Looking to the future

The plant-based sector is more innovative than ever, and restaurants aimed at both vegans and the vegan-curious are getting their knives out to take on the competition.  When Mintel reports that 27% of Brits plan to buy vegan food this year, there is everything to play for.

Sometimes food trends come and go within months, but other times they create a fundamental change in how we live.  Macphie believes that a diet free from animal derivatives is part of a long-term change in society.

Who are the plant-based consumers?

The media may have you believe that flexitarianism (a reduction in meat consumption) is all about Millennials and Gen Z consumers, but this is not what we are seeing.  Quorn is seeing a massive boom in older consumers moving towards plant-based food.

There are a variety of reasons why people choose to cut meat out of their diet such as health, sustainability, belief and cost.  Recent research from Quorn identified that 67% of older plant-based shoppers say they’re making food choices based on how it impacts the next generation.  The shift towards reducing meat for sustainable reasons has been huge this year.  It’s now the second-biggest motivator for meat reduction in the UK after health, which remains the most significant driver for the category.

What will your 2020 new years resolution be? And more importantly will you stick to it?